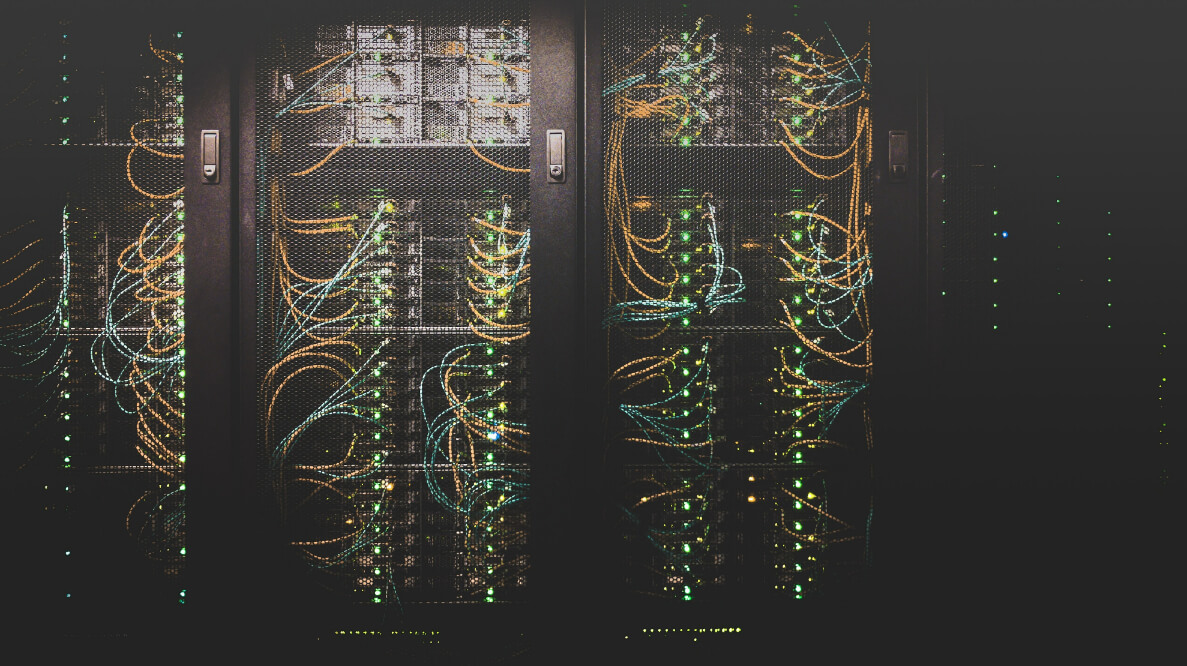 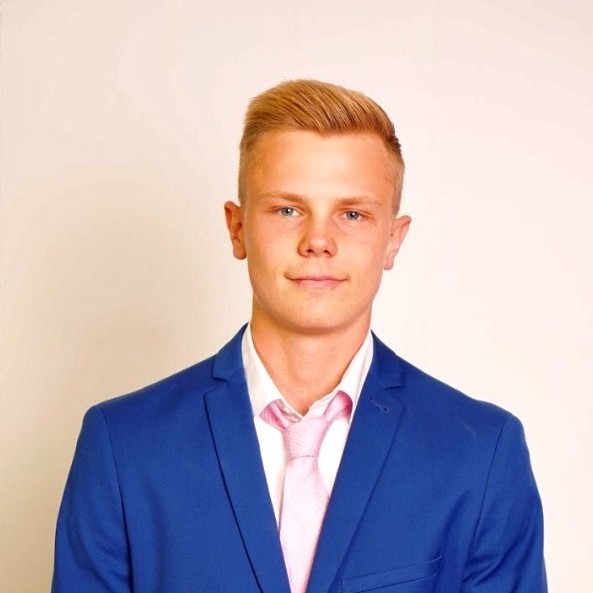 When it comes to Bitcoin’s energy consumption, there has been no shortage of attention as of recent, and with the climate crisis intensifying, said attention was almost exclusively criticism pointing out the irresponsible energy consumption of the Bitcoin network. And while it is true that the Bitcoin network does need more energy than entire nations, the narrative so frequently told fails to factor in some key aspects that are essential to bear in mind when engaging in such a polarizing discussion. That’s why we decided to objectively break down some of the most widely used arguments and shed some light on a tenacious topic.

Before we dive deeper into the aforementioned discussion, let us rewind and begin by clarifying what exactly a consensus mechanism is, what crypto mining has to do with it and why it is so crucial.

At the most fundamental level, a consensus mechanism is a way to come to an agreement between several parties. A plain majority vote between a group of friends who are indecisive whether to go to the movies or the park can be deemed a consensus mechanism. A similar logic, although at a way larger scale, applies to cryptocurrencies. For a decentralized, globally scattered network of computers to run seamlessly without a governing central authority, there has got to be a definite way of making decisions.

In Bitcoin’s case, this way happens to be a proof of work (PoW) consensus mechanism, which entails the hotly debated crypto mining.

Bitcoin miners solve cryptographic puzzles to add new blocks to the blockchain, thereby calculating quintillions of hashes - a function converting any input into an output with a predetermined length - every second.

Due to the inherent, and completely intended difficulty of such a mechanism, it takes a lot of energy to perform said computations.

It is the mining process that keeps the network secure, and prevents malicious actors from tampering with the blockchain ledger or spending more Bitcoin than they actually own (this is referred to as the notorious “double spending problem”, one of the core issues of any form of digital money). Miners are incentivized to keep the network secure because they receive a block reward in the form of newly issued Bitcoin whenever they are the ones to solve the cryptographic puzzle.

One might object that there are other, more sustainable consensus mechanisms, such as proof of stake (PoS) or proof of authority (PoA), and indeed, they are by now the most adopted consensus mechanisms. However, they have some downsides as well, such as an inclination to favor those network validators with large funds, potentially deteriorating a network’s decentralization over time. And neither do they have PoW’s proven track record and reputation, nor do they perform a unique transformation process involving energy and time, which we will cover in more depth later on.

With that out of the way, let’s check out some facts.

This statement is derived from a well-known and frequently cited 2018 study published in nature's climate change journal1.

Two degrees Celsius because that is when things start getting real ugly climate-wise (currently, we are at about 1.4). Freshwater availability would shrink dramatically in the Mediterranean, sea levels would rise by 10 centimeters until 2100, threatening coastal regions, and crop yields would decline between 6%-16% in some regions2.

Essentially, the study makes some severe claims, arguing that Bitcoin mining alone might push global warming to the dreaded 2-degree threshold. And indeed, much of it is based upon some questionable assumptions.

The authors’ procedure was as follows:

For starters, the authors imply that the Bitcoin network would keep growing at a rate similar to the one it experienced during the 2017 crypto craze, which of course did not happen.

Also, they projected that Bitcoin would end up processing nearly 1 billion daily transactions, which again, is completely unrealistic given Bitcoin’s tx/s stats and block time. At the current stage, the network processes around 250,000 transactions per day (and ~ 7 transactions per second). The only way Bitcoin could reach comparable dimensions is using the Lightning network3, which however would not cause any significant further emissions due to the architecture of Layer 2 scaling solutions.

The authors also set a single transaction’s electricity use similar to the use of an entire block4. One block, however, can include up to 3,000 transactions at the current stage.

In addition, the authors do not take into consideration the efficiency improvements of mining hardware. They based their extrapolation upon energy consumption numbers from mining hardware in the period between 2013 - 2015 (around 2 Watt/GHs), which has decreased by more than 80% by now if we look at most recent mining hardware5. Miners have been and will continuously be incentivized to invest in more efficient tech to save costs and maximize profits.

#2 “Bitcoin is powered by fossil fuels”

Another argument made frequently is that Bitcoin is overwhelmingly powered by fossil fuels, and therefore severely damaging the environment.

Throughout the past years, prompted by urgent calls for environmental sustainability and dropping prices, renewables have established themselves as a major energy source responsible for running the Bitcoin network.

There are many estimates on how much of the Bitcoin network is fueled by renewables, ranging from 40% to 75%.

However, two developments can be noted:

Ever since Beijing cracked down on Bitcoin mining during this year’s summer, the United States has established itself as a clear hotspot for miners, having made up over 42% of all mining globally in August - in comparison, in September 2020 they merely accounted for 4.1%7.

The good news is that the US major ‘mining states’ are making a lot of progress in terms of providing sustainable energy sources. New York produces more hydroelectric power than any other state east of the Rockies, Washington State is known for its hydro-powered mining farms, and Texas’ share of renewables is growing as well - in 2020, 25% of all energy was derived from either solar or wind, and 46% of all energy was won using natural gas, which admittedly still is a fossil fuel, but relatively harmless in terms of carbon emissions compared to nuclear or coal energy. In general, North American miners are using much more renewables than their peers in Asia, primarily China, have been. As of 2020, in North America, the regional average share of renewables was 63%, as opposed to only 26% in Asia-Pacific8. Hence, environmentally speaking, China’s mining ban seems to have been a good move.

Miners are incentivized to go wherever energy costs are the lowest to maximize profits, since mining is a low-margin business, and energy consumption comprises 79% of operational expenses on average. Crypto mining, being a strong driver of demand, has played a non-negligible role in accelerating the growth of green energy (see figure 1 below).

Also, let’s not forget that energy used for mining is and will growingly be reused for other purposes. Take MintGreen, a Canadian Bitcoin mining company looking to utilize that energy to heat 100 commercial buildings and houses in North Vancouver, providing warmth for roughly 155,000 citizens. Or the GreenMine Container in the Netherlands, where thermal energy from mining operations is removed using a non-corrosive oil, transmitted through a heat exchanger before it gets converted into hot water which heats an adjacent greenhouse tomato farm10.

Figure 1: A simplified graphic illustrating how increasing renewables use can lead to growing affordability

#3 “Bitcoin consumes way too much energy”

A recent study conducted by the Frankfurt School Blockchain Center and intas.tech found that the worldwide Bitcoin network required 90.86 TWh and 37.97 MtCO2eq ((Metric tons of carbon dioxide equivalent) within an annualized period from September 1, 2020, to August 21, 202111.

Put into context, Bitcoin mining is left with 0.08% of global CO2eq (37.97 MtCO2eq/45,873.85 MtCO2eq), which sounds like a fair “price” for running the most secure, decentralized, autonomous monetary system humankind has ever seen.

Similar conclusions can be drawn if we compare Bitcoin’s greenhouse gas emissions with those of Gold or the Finance & Insurance sector, as illustrated in figure 2. 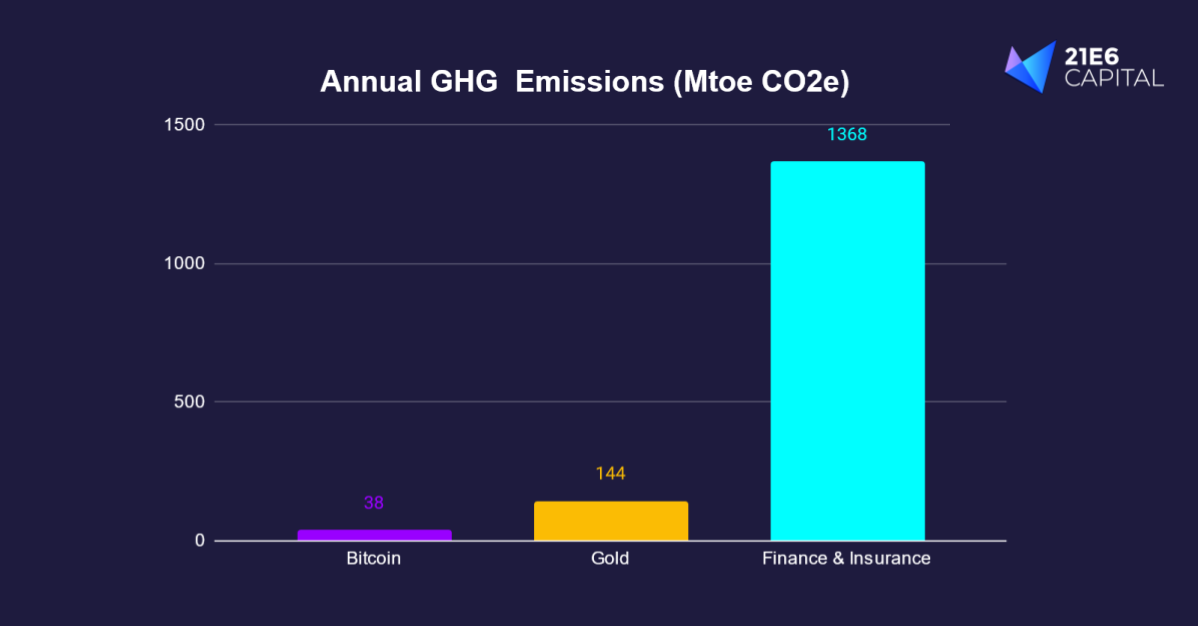 There is no denying that Bitcoin does have an impact on the climate, however, its consequences are oftentimes dramatized or put out of context. In response, certain approaches revolving around possibilities to offset BTC’s carbon emissions have already emerged (and will continue doing so), which we will address in a later article.

PoW is, at its core, about deliberate energy use. It's about the process of converting energy into a digital commodity by solving cryptographic riddles.

The amount of resources required to operate this ecosystem is part of what gives Bitcoin its intrinsic value, and what makes it a contender for "digital gold” - a means of storing energy infinitely. It is a feature, not a flaw, that secures the entire network by demonstrating that work has been done through costly computations and equipment.

And it may even be one of the factors that helped cryptocurrencies gain popularity in the first place. The actual focus should move away from the energy consumption itself and toward where that energy comes from, and how the mining process can be done in an increasingly sustainable way.

21e6 Capital is a Swiss investment advisor, connecting professional investors with optimal crypto investment products. 21e6 Capital has analyzed over 1,000 crypto funds across the world and condensed them into a selection that can yield crypto-exposure with minimized downside risk. Backed by a highly experienced team of crypto and finance experts with in-depth knowledge in digital assets and DLT, 21e6 Capital created a unique quantamental strategy that is aimed at achieving crypto-like returns while minimizing risk and volatility to global equity levels. The 21e6 Capital team builds upon strong academic roots with a track record of leading crypto asset and decentralized finance publications and research, ensuring state-of-the-art crypto investment solutions for financial industry professionals.

Elias Mendel studies International Business and Economics at the University of Applied Sciences Schmalkalden. Currently, he works on several projects dealing with DLT, digital assets, and blockchain. You can contact him via email or LinkedIn.

Previous Story
← Wanted: Junior Sales Associate for a Crypto Asset Management Firm
Next Story
The Rebirth of the Fund of Funds →

These Stories on crypto

An Intro To Investing In Crypto Assets For Professional Investors